AN ABBAMAZING INTERACTIVE AND OVERACTIVE EXHIBITION

MORE than 30 years since ABBA’s first live performance in Australia at the Sydney Showgrounds in Moore Park on that wet evening of 3 March 1977, ABBA fans can relive the hormonal, adolescent dramas of being desperate teenage ABBA fans who just wanted to go to a pop concert, any pop concert, but got sucked into a black hole-ish vortex from which they would emerge singing “Mamma Mia, here I go again.” And again and again.

Cotton Ward, curator of ABBAWhirl, said: “This is a unique opportunity to see original ABBA fan material. For more than 35 years, ABBA has been one of the top three selling artists in the world, having sold 375 million records worldwide, mostly to people I know.”

“No expense has been spared in staging ABBAWhirl in my flat — genuine ABBA scrapbooks from the era, and the ABBA dolls are sitting on top of the telly.”

ABBAWhirl examines the early days of sending letters and waiting breathlessly for the latest edition of the Swedish Pop Import, the official ABBA Fan Club’s buy and swap columns, and Record Collector ads. There is a blaring, wind-up alarm clock to remind you of the many early mornings of getting up for record fairs at town halls to be among the first to get to Parramatta or Kur-ring-gai, and endless scouring through secondhand shops for memorabilia. The lunchbox, dolls, socks and full set of bubblegum cards were the holy grails. The usual finds were a couple of singles, which you already had, and maybe an old edition of an ABBA Annual or a copy of TV Week or Spunky!

A rotary dial phone reminds you of all the times fans would ring each other up with news of the latest overseas bootlegs available at Red Eye Records, or the next performance of Bjorn Again at small venues, for $10 a ticket.

ABBAWhirl conveys an era when reports of social get togethers for the Aussie After ABBA magazine used to be posted to Melbourne on a computer disk which always got corrupted. Other creative fan endeavours included costume-making, lyrics for Dancing Queer and an ABBA poem composed mostly from song titles.

At ABBAWhirl, you can reminisce about the bold ABBAMAIL online forum, a fearless group run by two Australian ABBA fans who’d started it up because some other forums were homophobic and only allowed sanitised discussion. This renowned worldwide forum was famous for its critiques of money grubbing re-releases of greatest hits, before it was crushed by a music industry behemoth that singled the community out and hammered it with legal threats over bootleg DVDs (similar to DVDs which can be bought online today, from other sellers).

ABBAWhirl has firsthand accounts of fans’ experiences of the 1977 concert, conventions, trips to the world premiere of Muriel’s Wedding, a premiere of Priscilla Queen of the Desert, and Mamma Mia the Musical. Also, an account of when several Australian fans went to Sweden and had sightings of three ABBA members and got photos and a couple of autographs.

Experienced ABBAWhirl volunteers will sit near a fireplace, in peaceful solitude, seeing long forgotten scenes, with the present running into the past, as they recall the Missing in Action comrades who have passed on, become too obsessed, sold their collections, bought them back again, joined cults, had heartbreaks, and general fallings out.

“The past, well, now let me tell you about the past. Some of the best times of my life came from being an ABBA fan,” Cotton recalled, as the dying embers warmed her face. “There were times of joy and times of sorrow. Everything comes back to me again. Sometimes I wish that I could freeze the picture and save it from the funny tricks of time. I don’t care what comes tomorrow, we will always see it through. We can face it together, the way old friends do.”

Of the fun times, she said: “We’d do regular jaunts to see ABBA – The Movie with about 150 other cinemagoers at the Valhalla, Glebe, and then go back to Sandra and Louise’s place for a 12-hour ABBA viewing marathon. Videos of ABBA in Japan, ABBA in Poland, ABBA in Germany, ABBA in Switzerland, ABBA in the UK … we’d eventually run out of videos to watch and have to beg Sandra and Louise to let us stay and watch old Countdown specials which featured two seconds of ABBA at the end of each one for 14 weeks when Fernando was Number 1 in the Top Ten. Or we could stomp away on their pianola, churning through rolls of Money Money Money and Dancing Queen.

“Nowadays, we pretty much do exactly the same sorts of things, but because we have all the music clips available now online or DVD, there’s no need to sit through 12-hour viewings; events usually last three hours. One of us will bring along an interesting piece we’ve recently bought. We get together to watch TV specials, DVD re-releases of Greatest Hits, Eurovision, the occasional tribute band, retro disco, visit a Swedish restaurant or see the ABBA drag act at the Imperial Hotel.”

Among the exhibition’s highlights are four replica costumes, live fan footage of various incidents we’d mostly rather forget (but ended up on bootleg DVDs were sold to fans around the world), fans-in-action photographs taken from the frontline when an ABBA member was rumoured to be appearing (usually a false rumour), the original vinyl albums (received as birthday and Christmas presents) and other fandom detritus – fanclub magazines, exclusive interviews with ABBA fans going On and On and On. 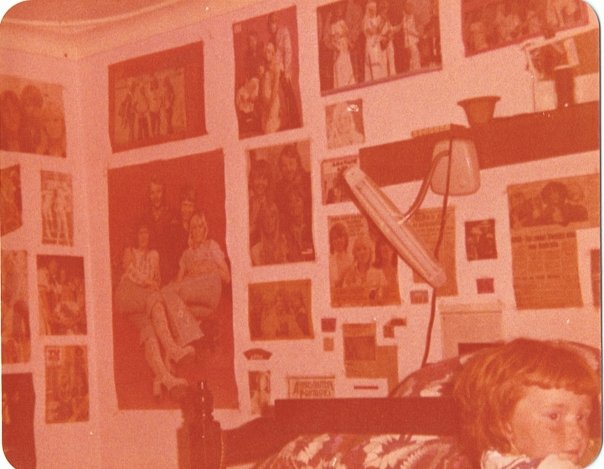 Hairbrushes will be provided to use as microphones for your rendition of this rollercoaster journey of life as an ABBA fan.

The lyrics to DANCING QUEER are here.

ABBAWhirl features a replica of the lump of Blu Tack that ABBA expert, guru and legend Ian Cole still has, that held up all of his posters before he took them down in 1979.

DRESS UPS BOX: There will be a couple of cartons of Multix “stronger than ordinary foil” 20metres x 30cm for all your alfoil needs and strategic placement.

THE ABBAWHIRL RESTAURANT: Our ABBAWhirl volunteers cook — using the instructions off the Uncle Toby’s box — the bland, colourless microwaved porridge that was eaten for the week when Cotton’s kitchen was totally taken up with paint and materials while trying to make a white silk ABBA costume and she didn’t want to risk staining anything, so all coloured foodstuffs were banished.

[Cotton’s ex-husband emailed us, after this revelation, to say: “I don’t know what she’s on about, she used to eat bland microwaved porridge all the time anyway.” Thanks Eddie!]

Reward for missing ABBA “Girl with the Golden Hair” wig.

ABBA reunion for the opening of ABBAWhirl?