Held an ABBA picnic to play a new ABBA trivia board game I’d put together and have a sing-a-along. 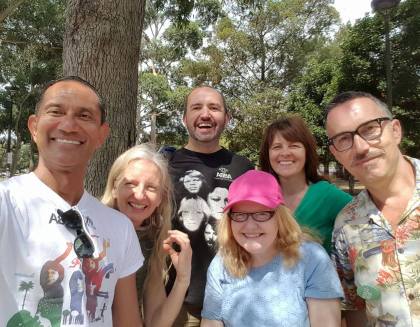 I staked a perfect spot under a tree and sent out an SOS as there were picnickers everywhere in Camperdown Park, and I urgently needed more blankets to claim our turf.

A word re: Aussie ABBA fans: we’re hugely tolerant and will put up with retro discos where only hip hop is played, endure ABBA tribute bands that don’t know the words, and pay ridiculous amounts for smoked salmon on Ryvita at Scandi restaurants. But nobody messes with an ABBA picnic, and fans scurried back to their cars to bring extra blankets.

First on the scene was G, who’d just walked the length of uber-hipster King Street while wearing his Voulez-Vous badge – woe betide anyone who would dare make fun of it, and a few paid tribute by singing “A-ha!”. “It’s not just a badge, it’s a way of life,” G said, with his proudest expression.

To keep the picknicking hordes at bay, we did a rendition of the horrifying Portishead cover of SOS, which worked until D arrived and broke out into his Lay All Your Love On Me chorry (the unforgettable Mamma Mia movie version) with improvised snorkel and flippers made from low-lying branches and recyclable drink containers.

We soon attained maximum hygge with a big smorgasbord and several blankies. AK, who has our unceasing admiration for famously living only on IKEA food for several weeks as part of some weird food experiment, brought along his top choices: marinated herring and knäckebröd (crispbread). We devoured cold barbecued chicken and salads with lots of mayonnaise, washed down with sparkling dryck lingonberry and fläder (elderflowers). Dessert was Swedish bikkies and chocolate, we tried our best to eat it all!

Then Yol whipped out her ukulele and sang Swedish versions of ABBA hits and even the other picnickers were impressed! Somehow we managed to remember the National ad lyrics — “just slightly ahead of our time” — then sang rousing versions of He Is Your Brother, SOS, Happy Hawaii, When I Kissed and Thank You For The Music.

After a long chat about the recent ABBA reunion — where Frida and Agnetha sang live for Bjorn and Benny’s celebration of 50 years of friendship — we knuckled down to my ABBA trivia game, which is a conflation of Trivial Pursuit, Monopoly and Snakes & Ladders.

The major part, of course, is choosing your customised token, and L wanted Stig, which was the only one I hadn’t made! There were dozens of other tokens of the ABBA members to choose from.

I had a lot of questions lined up and we got through most of them. G won impressively, easily beating everyone as he knew all the ABBA birthdays!

After several hours, the tree’s shade moved and the weather warmed up to 40 degrees, so we headed home before we all melted! Which happens in Sweden probably never!!