It was lucky for us ABBA fans that Ukraine’s flag has the same colours as Sweden, so there were plenty of blue and yellow streamers strung around! 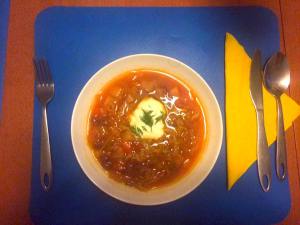 Elise had hidden gold-foil covered chocolate coins (Money, Money, Money) around the house, so we searched until we found 30 of them, and got “hot” and “cold” clues to find the last ones which were hidden in an impossible “Escape Room” location.

All the Second Semi-final acts seemed to need autotune! We adored the lovers from Belarus, Naviband, dressed in white on a hovercraft boat in a dry ice sea, so we encouraged young lovers Annabel and her boyf to go in as our entry next year. They duly played along by busting out some yooful dance moves. When the semis finished, we relished watching all the Eurovision winners since 1956 via Youtube.

Time for bed, so we turned the lights off and told Ukrainian bedtime stories about deposed Tsars, beasts of burden and cranky cossacks, while Rodders brought the scenes to life using glow-in-the-dark sticks and a wonky lava lamp. Better than Vivid!

After four hours’ sleep, we were up on Sunday at 4.45am to watch the final in real time and it’s so wonderful hearing the Eurovision trumpet theme so early! (well, you had to be there!)
Rushed into the kitchen to cook bacon and eggs and it was about song 4 before we’d woken up enough to fully appreciate the acts.

There was a bridal rap, horsehead man on a ladder, floor-length braid, Italian Wiggles doing aerobics with a gorilla and Norway’s philosophical depth. Me and Sandra melted whenever Sweden’s blue-eyed treadmilling star looked at the camera.

Last year’s winner Ukrainian Jamala sang and we were in floods of tears when a prankster draped in an Aussie flag jumped up and mooned!! We imagined we’d be kicked out of the competition forever and was sure it had affected our country’s votes. Such a relief to later discover it had been a Ukrainian prankster.

During the laborious voting process, I hid behind a giant teddy bear and slept, waking up in time for the winner’s announcement.

Rodders won the bingo and I was pleased online peeps also downloaded my version – nice to think of people playing it around the world.