I transcribed the lyrics as I couldn’t find them anywhere else:

It’s time to say “Goodbye Goodbye”, it’s sad but time’s the reason why … we must bid farewell for a day or two.

The week has gone so very fast, but as they say, what’s past is past …

And we are looking forward to next week anew.

Though you are out of sight, we’ll find, you are not out of mind …

Think of us a little bit cause we’ll be thinking of you.

We hate saying goodbye, hardly an eye is dry…

We’d like to put it off til tomorrow, then we’d only say — the goodbyes we should be saying today; time is something we cannot borrow…

We’ll count the hours til Monday’s show – and there’s one thing you must know, believe every word we say is true, so true …

For no one else can take your places, we’ll remember all your faces, think of us a little bit cause we’ll be thinking of you.

So til we meet again, Be good, Do all you can that’s right and we’ll be back to see you same time on Monday night. Goodnight.

We’ll be thinking of you, dear children … just you.

My favourite characters were Fester Fumble, Miser Meanie and Squire Squeezem. It ran on the ABC form 1967 (and with repeats) until 1976. Was set in Diddley-Dum-Diddley.

From Wiki: “Samson (the pussycat) was actually a magic cat who would be invisible until Monday afternoon’s episode. To make him appear, the hostess would need to answer a question he would ask from “beyond”. He would disappear again on Friday afternoons by sneezing.”

The “Sue” in the Adventure Island clip is Sue Donovan, Jason Donovan’s mum. She was an ABC newsreader.

Artist Christopher Dean did a series of artworks based on the show. He says: “Although this program was in black and white it created the genre of a psychedelic pantomime and introduced young children to issues such as nuclear disarmament, non-traditional gender stereotypes such as drag and left wing politics that emphasised that the baddies were always in charge.” His paintings here.

Just got round to watching a doco on Skippy I’d taped on my VCR last week. Love the theme music but it’s such an earworm! There were 91 episodes made from 1966-8. It was filmed by English blokes who appreciated the Aussie light and bush, so they did lots of wide vista shots. Sweden wouldn’t show it cause it would make their kids think animals could save the world!

Skippy was shot in Ku-ring-gai, which is now being redeveloped with high-density housing. I’ve visited Waratah National Park – it was set on 13 hectares with the Ranger’s office intact. You can’t go and visit it now cause it has closed down and the 140 kangaroos have been re-homed. The office might re-open someday. 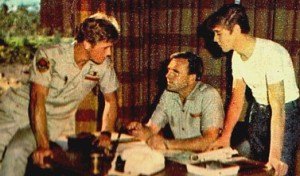 Pics from the series from Don Storey’s excellent Skippy site.